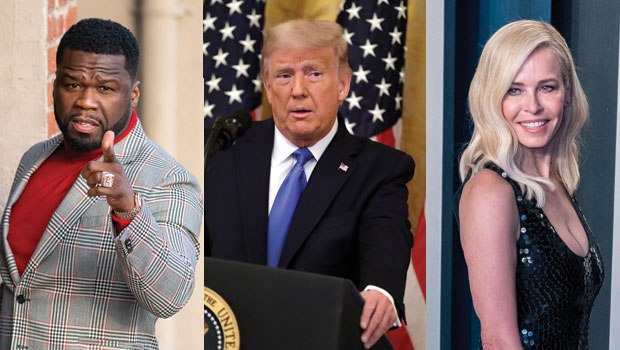 50 Cent has officially denounced Donald Trump less than a week after asking his followers to vote for him.

It all started when Fifty took to social media to post a picture of an alleged Biden tax plan, which stated that people in Fif’s tax bracket would have to pay 62% in taxes in the state of New York. The entertainment mogul admitted, “I don’t care Trump doesn’t like black people 62% are you out of ya fu**ing mind.” Fifty faced major backlash after including a Trump endorsement in his post, including from his ex-girlfriend, comedian Chelsea Handler.

Chelsea showed up in the comment section of Fifty’s original post, writing, “You used to be my favorite ex-boyfriend.” When Fif responded by saying, “don’t let Trump and Joe Biden come between us girl,” Chelsea replied saying, “I will pay your taxes in exchange for you coming to your senses. Happily! Black lives matter. That’s you, f*cker! Remember?” And Chelsea didn’t stop there. It seems that Fifty’s reckless endorsement on the eve of one of the most consequential elections in American history led Chelsea to strike a second bargain.

Appearing on the Tonight Show with Jimmy Fallon, Chelsea brought up the issue once again, pointing out that the tax rate Fifty was complaining about isn’t actually a part of Biden’s plan. She condemned the former G-Unit rapper’s words, saying, “He shouldn’t be influencing an entire swath of people who may listen to him because he’s worried about his own personal pocketbook.”

Chelsea also added an extra incentive for Fifty, saying, “I am willing to seal the deal in more ways than one if he changes his mind and publicly denounces Donald Trump.” It looks like this last bit caught Fifty’s attention, as he quickly tweeted, “a what, another spin. Fu*ck Donald Trump, I never liked him.”