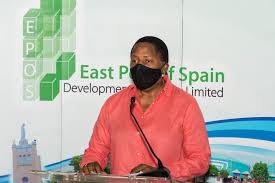 $45M to refurbish East Side Plaza in POS

As part of Government’s plan to revitalise the capital city, Housing and Development Minister Pennelope Beckles has announced that they intend to spend approximately TT$45 million to renovate and refurbish the East Side Plaza on Charlotte Street, Port-of-Spain.

Speaking during a press conference hosted by the Ministry of Works and Transport, Beckles said the project will be funded by an Inter-American Bank loan and will improve the health and safety aspects of the building, which is about 100 years old and has been used since 1991 as a business incubator for entrepreneurs to grow their businesses.

She added: “It will serve to significantly boost the economic performance and attraction of this iconic edifice that once served the capital city’s historic market. In so doing the project would result in the rebranding of three malls- the East Side Plaza, New City Mall and 43 Independence Square as a single entity under the Port-of-Spain Shopping Complex Limited.”

“It will increase the building’s accessibility and functionality and revamp the physical infrastructure including electrical, plumbing and air condition systems- the project will also see the introduction of new cost-saving green building initiatives such as thermal insulation for the roof, installation of a chilled water air condition system and enhanced optimisation of natural lighting.”

Beckles sad she had heard rumors that government was planning to sell the Plaza to the Chinese Government, but she said “that is totally and absolutely false.”

Loading...
Newer Post
TTCB has yet another request to start domestic cricket season shut down
Older Post
Scandalous state of affairs at WASA – over $1.1M in overtime paid to PSA officials