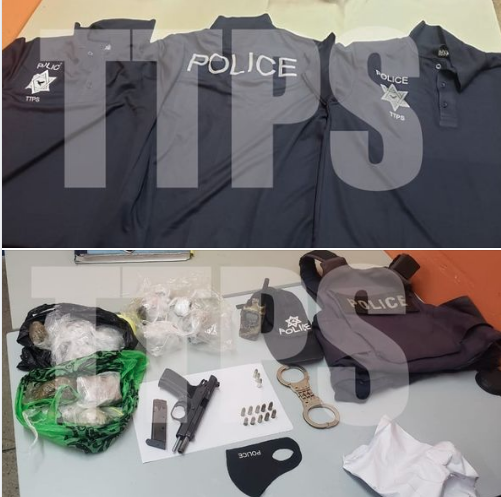 They were arrested by officers of the Morvant Criminal Investigations Department (CID) during an anti-crime exercise conducted in the Morvant district on Wednesday 10th February, 2021.

The exercise was spearheaded by Snr. Supt. Winston Maharaj, Supt. Roger Alexander, Ag. Supt. Ramhohn, ASP Beharry, officers of the North Eastern Division Task Force, and the Gang Unit between the hours of 4 am and 8 am on Wednesday.

Based on information received, the officers proceeded to the housing development at Paradise Heights, Morvant, and conducted a search at one of the apartments.

During the search, officers allegedly found one Tanfoglio Pistol with one magazine and 13 rounds of nine millimetre ammunition, as well as a police-issued bullet proof vest, one police issued pair of handcuffs, a fake police cap, fake police jerseys, two facemasks with “Police” written on it, and 1.1 kilograms of marijuana.

The three men ages range from 18 to 25 years were arrested.
PC Ball is continuing investigations.