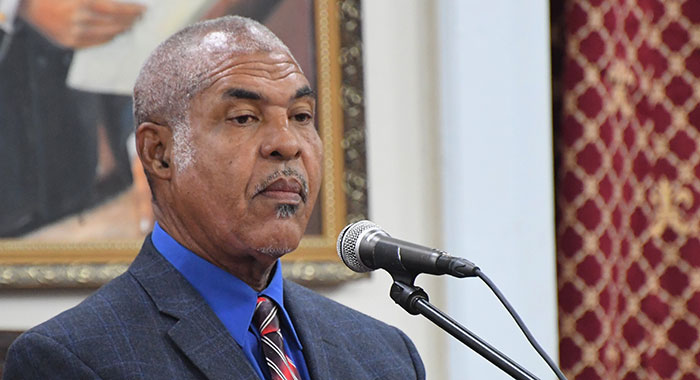 Speaking during a press conference on Monday, Daniel said he could identify around three dozen people still in the community of Sandy Bay, when he inspected the north-eastern sector of St Vincent on Sunday to assess the damage that has so far taken place.

Daniel said when he visited Sandy Bay over the weekend, he saw people walking the street as if it was life as usual within the red zone.

He said many roofs have collapsed and sheds are completely destroyed. He added, “The ashfall in some areas would have been so deep that all of the vegetation would have been covered.

“There’s not a single blade (of a crop) outside on some of these farms…There is not going to be very much food in that area for some time.”

Prime Minister Ralph Gonsalves said a decision will be made sometime Tuesday on whether to officially end the evacuation services of minibuses and other transport.

He said, “People seem to want to stay home, but they had that option. So if they don’t want to take up that option, fine.”

Meanwhile, the UWI Seismic Research Centre’s update for Monday evening, stated that the pattern of seismic activity changed again, with the end of the episodes of high-amplitude tremor 2-8 hours apart.

There were three episodes of tremor recorded, two of them lower-amplitude and the third, at about 5pm, was high-amplitude.

There will be a reconnaissance of the entire north coast of St. Vincent from Chateaubelair to Georgetown with assistance from the Coast Guard.

UWI-SRC added that observations made indicate that pyroclastic density currents (PDCs) had descended several valleys on the southern and western flanks of the volcano and had reached the sea at Morne Ronde, Larikai and Trois Loupes Bay.

Explosions and accompanying ashfall, of similar or larger magnitude, are likely to continue to occur over the next few days with the chance of PDCs occurring.