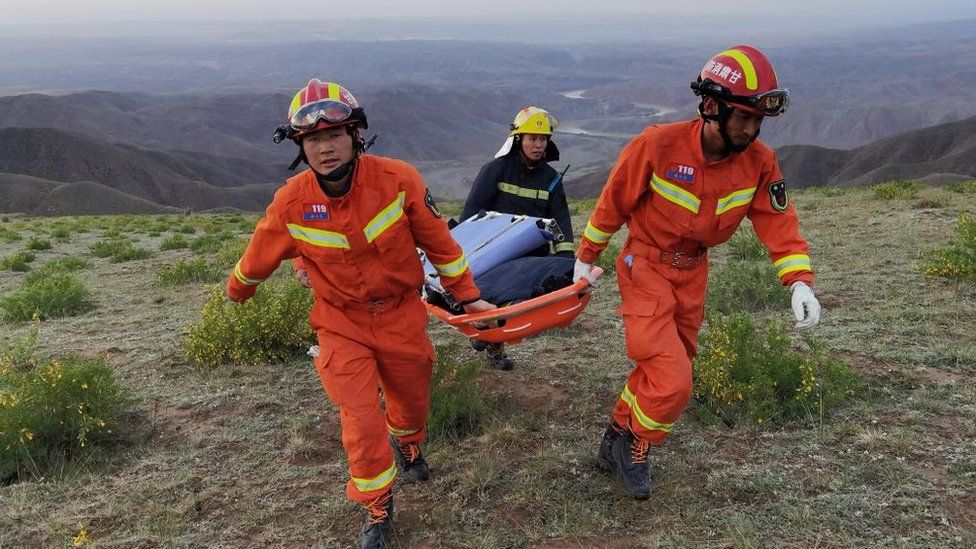 High winds and freezing rain hit participants in the 100km (60-mile) ultramarathon in the Yellow River Stone Forest, a tourist site in Gansu province, on Saturday.

The race was halted when some of the 172 runners went missing, and a rescue operation was launched.

Many of the stranded runners reportedly suffered from hypothermia.

Officials said 151 runners were now confirmed safe, and that eight of them were injured.

The race began at 9:00 local time (01:00 GMT) on Saturday, with some of the competitors setting off wearing just shorts and T-shirts.

Surviving participants said the forecast had shown some wind and rain was anticipated, but nothing as extreme as what they experienced.

About three hours after the start, a mountainous section of the race was hit by hail, heavy rain and gales, which caused temperatures to plummet, according to officials from the nearby Baiyin city.

One runner, Mao Shuzhi, told Reuters news agency she turned around when the weather changed.

“The rain was getting heavier and heavier,” said Ms Mao, who was about 24km into the race at the time and had not yet reached the mountains.

She decided to head back to her hotel, having had previous bad experiences with hypothermia, but others carried on or were already in worst-hit areas.

Many runners reportedly lost their way on the route as the weather affected visibility.

More than 1,200 rescuers were deployed, assisted by thermal-imaging drones and radar detectors, according to state media.

The operation continued through the night into Sunday morning, during which time a further drop in temperature made the search even more difficult, China’s Xinhua news agency reported.

The deaths have sparked public outrage on Chinese social media, with anger mainly directed at the Baiyin government and unhappiness over the lack of contingency planning.

In a press conference on Sunday, Baiyin’s Mayor Zhang Xuchen said: “As the organiser of the event, we are full of guilt and remorse. We express deep condolences and sympathy to the families of the victims and the injured.”

Two charged and two others held for firearm-related offences 0