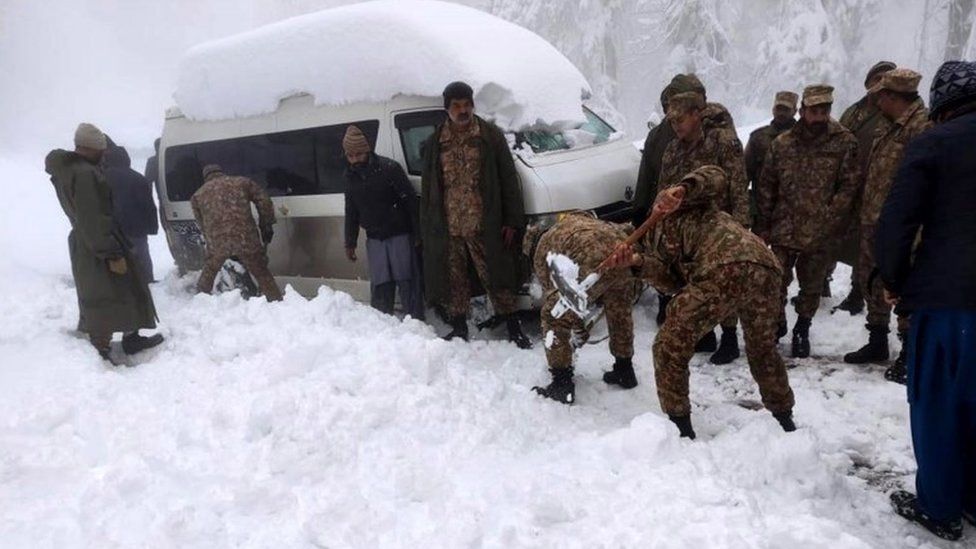 At least 21 people have died after heavy snow trapped them in their vehicles in northern Pakistan.

As many as 1,000 vehicles became stranded as would-be tourists reportedly rushed to view the winter snowfall in the hilltop town of Murree.

A policeman, his wife and their six children, as well as another family-of-five, are among the dead, according to local emergency services Rescue 1122.

The military is attempting to clear roads and rescue those still trapped.

Interior Minister Sheikh Rashid said the crisis had been caused by the number of people travelling to the area, north of the capital Islamabad. More than 100,000 cars had arrived in the colonial-era town in recent days, with social media in Pakistan flooded with pictures of people enjoying the snow.

But by Friday, local media reported that tourists were getting stranded. On Saturday, the heavy snow and increase in vehicles prompted authorities to declare the region a disaster zone.

At least 21 people have died, including 10 children, according to emergency services. Police said at least six had frozen to death in their cars. Asphyxiation after inhaling fumes has been given as a possible reason for the others.

“People are facing a terrible situation,” Usman Abbasi, a tourist stuck in the town where heavy snow was still falling, told AFP news agency by phone.

“It’s not only the tourists, but the local population is also facing severe problems,” he added, saying there were gas and water shortages.

Locals have provided blankest and food to the trapped, while those who could make it up to the town – which sits at 2,300 metres (7,500 feet) above sea level – have been given shelter in government and school buildings.

Prime Minister Imran Khan expressed shock over the “tragic deaths” of the tourists, noting how the snowfall and the “rush of [people] proceeding without checking weather conditions caught district admin unprepared”.

“Have ordered inquiry and putting in place strong regulations to ensure prevention of such tragedies,” Mr Khan said in a tweet.

Murree was built by the British in the 19th century as a medical base for its colonial troops.