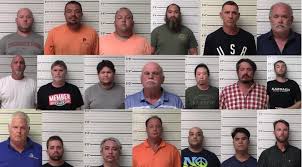 Twenty people who were allegedly involved in a massive prostitution ring have been arrested in Texas.

The suspects all sought after prostitutes, and some of the people they arranged time with children.

Officials at the Kerr County Sheriff’s Office in Texas say they arrested 20 people accused of being a part of a huge multi-day prostitution setup that spanned across the region and involved more than 265 people.

The suspects age ranging from 38-50 were booked on a number of crimes, including solicitation of prostitution, online solicitation of a minor, delivery of a controlled substance, and other charges. Fox 7 Austin reports that other charges may be pending as the probe continues.

Soca artiste Blaxx has passed away 0