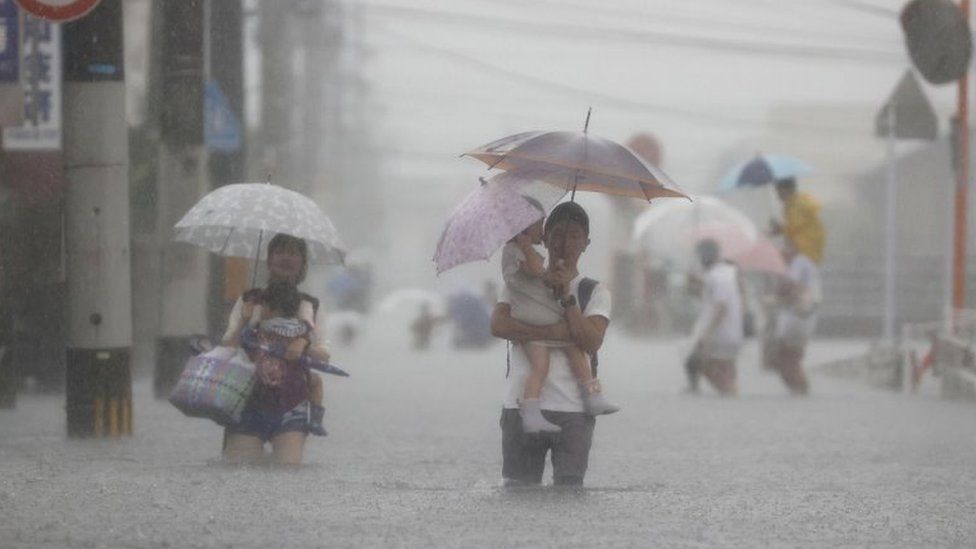 Nearly two million people have been urged to evacuate their homes amid heavy rainfall in parts of Japan.

Highest-level rain warnings have been issued in a number of prefectures, including Fukuoka and Hiroshima.

One woman has died and her husband and daughter are missing after a landslide destroyed two homes in Nagasaki prefecture.

More than 150 troops, police and firefighters have been sent to help with rescue operations in the area.

“They are carefully searching for the missing residents, while watching out for further mudslides as the heavy rain continues,” a local official told the AFP news agency.

The west of the country is worst affected but heavy downpours are expected across the country in coming days.

In Saga prefecture, a hospital evacuated patients to its upper floors on Saturday after the nearby Rokkaku river overflowed and flooded the building, Kyodo News agency reported, citing local authorities.

In total, non-compulsory evacuation warnings are now in place for more than 1.8 million people across seven prefectures, according to Japanese broadcaster NHK.

“It’s highly likely that some kind of disaster has already occurred,” he said.

Loading...
Newer Post
MoE to receive a tranche of over 5,000 laptops for distribution
Older Post
Man charged with murder of Annalisa Gokool after her body is dug up from grave