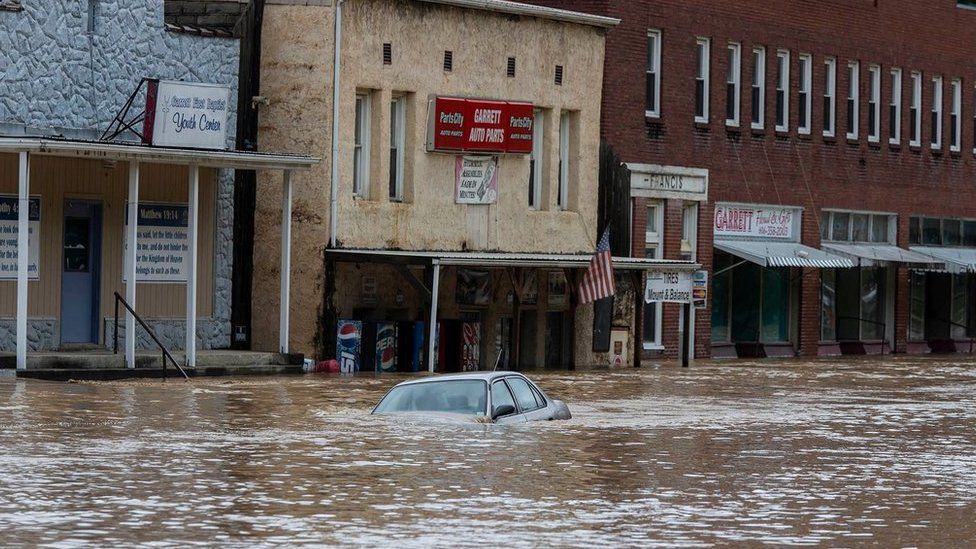 At least 16 people have died due to historic flash flooding caused by torrential rains in eastern Kentucky, the US state’s governor has said.

Kentucky Governor Andy Beshear said that he expects the death toll to continue to rise.

President Biden declared the floods “a major disaster” on Friday and ordered federal aid to help with local recovery efforts.

Among the dead are six children, including a one-year-old.

More than 23,000 people are also without power in the state.

After an aerial tour with the National Guard, Mr Beshear said the flood “is by far the worst” he has seen. Parts of cities are submerged under water, and some areas are impassable, he said.

The flash flooding came after heavy rains earlier this week. Hundreds of homes in Kentucky have been wiped out because of the floods, the governor said.

Some areas reported receiving more than eight inches, or 20 centimetres, of rain in a 24-hour period.

Flood warnings remained in effect as of midday Friday in eastern Kentucky, as well as for parts of Tennessee and West Virginia.

Rivers in the region are expected to crest throughout the weekend, and a risk of more dangerous flash flooding remained possible throughout Friday, the US National Weather Service said.

More rainfall is expected early next week, Mr Beshear said, urging people to have a safety plan in place.

Mr Beshear said it’s unclear yet exactly how many people are affected or missing. Some areas have been difficult to reach due to damaged portions on 28 state roadways.

On Friday afternoon, the governor confirmed that the bodies of four young siblings were among those who were found – the oldest an eight-year-old and the youngest a one-year-old.

The children’s cousin – Brittany Trejo – told the Lexington Herald-Leader that the children and their parents sought shelter at a tree after their home flooded on Thursday.

“They managed to get to a tree and … held the children a few hours before a big tide came and wash them all away at the same time,” Ms Trejo told the paper.

She added the mother and father, who survived, were stranded at the tree for eight hours before help arrived.

Around 50 air rescue operations were conducted on Thursday, along with more than 100 boat rescues. Nearly 300 people have been rescued across the state, with search and rescue efforts ongoing.

Kentucky, like other parts of the world, has seen the impact of more frequent extreme weather events. The state has seen more inches of rain outside the historical average in the last 10 years, according to date from the National Oceanic and Atmospheric Administration.

Bill Haneberg, a climate expert and the state’s geologist, said this rainfall event is “extraordinary” for Kentucky.

McDonald’s CEO out after relationship with employee 0