15 year-old held with guns and ammunition 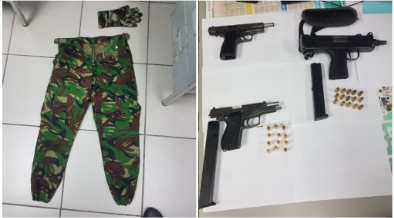 A fifteen year-old was one of four suspects immediately arrested during an intelligence-driven exercise in Tunapuna this morning. Officers executed search warrants at two houses along St. Augustine Circular in Monte Grande. There, they discovered one Mac 11 with a magazine containing 15 rounds of ammunition, and two Harrisburg pistols along with 12 rounds of ammunition. The officers also seized a quantity of camouflage clothing.

The exercise was coordinated by Inspector Joseph, and Sergeants Ammon and John. It also included officers of the Tunapuna Criminal Investigations Department, Task Force and Northern Division Special Investigations Unit.