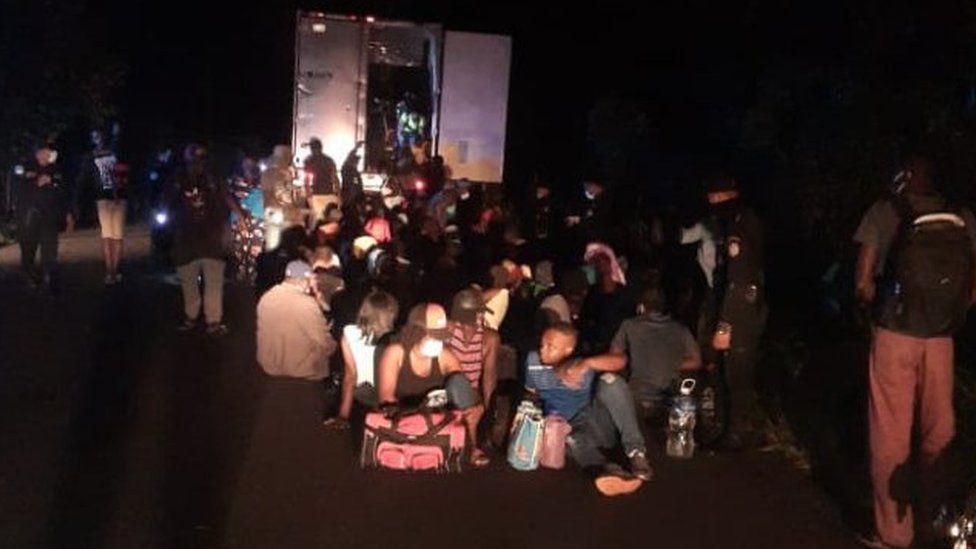 Police in Guatemala have rescued 126 migrants who were abandoned inside a shipping container at the side of a road.

They were found at dawn between the towns of Nueva Concepción and Cocales after locals reported hearing screams inside the trailer.

Authorities believe they were abandoned by smugglers who had been paid to take them to the US via Mexico.

More than 100 of those discovered are from the crisis-hit nation of Haiti.

There were also people from Nepal and Ghana.

Speaking after the discovery, a police spokesperson said: “We heard cries and knocks coming from inside the container. We opened the doors and found inside 126 undocumented people.”

Officers gave the migrants first aid before escorting them to a shelter run by the Guatemalan Migration Institute.

A spokeswoman for Guatemala’s migration authority, Alejandra Mena, said that the migrants had arrived in Central America in Honduras and from there begun to make the treacherous journey north to the US.

They will now be transported back to the border with Honduras and handed over to authorities.

The discovery comes just a day after Mexican authorities detained 652 migrants, including some 350 children, travelling in three refrigerated double-trailer trucks near the US southern border.

Soldiers at a military checkpoint in Tamaulipas searched the trucks after hearing voices inside.

The incident reflects growing concerns over the amount of migrants, among them large numbers of Haitians, taking significant risks in their attempts to reach the US.

Since the start of 2021, more than 50 migrants have died while trying to cross a jungle corridor called the Darien Gap in Panama, on the border with Colombia, according to the Panamanian prosecutor’s office.

Haiti has suffered from years of instability, culminating in the assassination of President Jouvenal Moïse in July. The following month, the country was hit by a deadly earthquake.