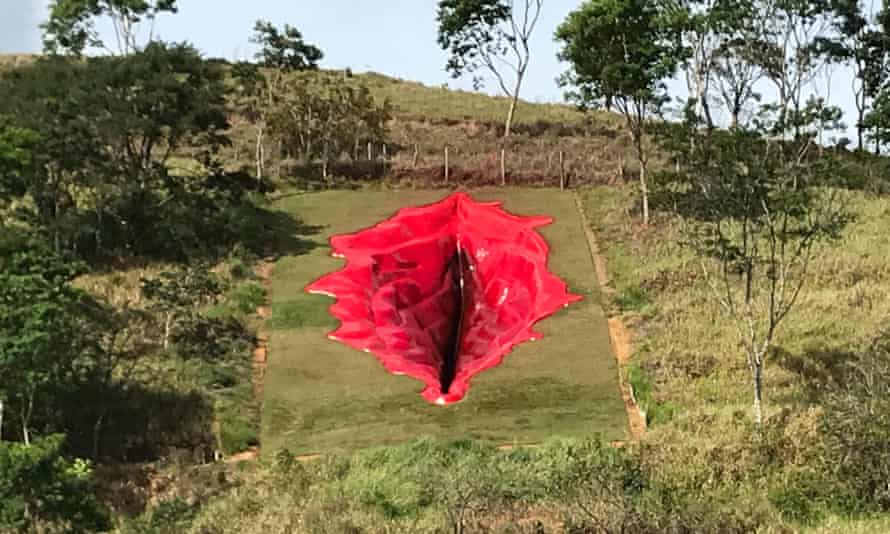 A huge vagina sculpture in Brazil is creating a culture war, with critics suggesting the creation of a giant penis to challenge it.

The 108-foot handmade sculpture of a female body part, created of concrete and resin by artist Juliana Notari, sits on a hillside in northeastern Brazil where a former sugar mill has been turned into an open-air museum, according to Reuters.com in a piece published Monday.

Pictures and clips of the giant red sculpture, titled “Diva,” have surfaced online and it’s creating quite a stir, with allies of the country’s President Jair Bolsonaro expressing their dislike of it.

According to the report: Unveiling the installation last week, Notari said it depicted both a vagina and a wound questioning the relationship between nature and culture in a ‘phallocentric and anthropocentric society.’

There has been heated social media debate around the giant vagina sculpture, and some amusing comments: "These men will never find the clitoris," quipped one user. https://t.co/9PDmWLg7q5

“These issues have become increasingly urgent today,” the artist wrote on her Facebook page, along with several snaps of the vagina sculpture. The piece took over 11 months to build with the help of 20 artisans, according to the report.

The piece noted that shots of the artwork had spurred some 25,000 people to comment on the artist’s Facebook page, with both supporters and critics reaching out.

Critics called it “obscene” and “transphobic,” per News18.com. One supporter suggested reactions to the work proved it was a “success.” Another reportedly said “it will never be understood by the patriarchs, the phalocrats and the neoliberal and facho-Christian mediocrities like Bolsonaro and his fauna.”

One such critic and political guru of Bolsonaro’s, Olavo de Carvalho, tweeted about the work and proposed a giant penis sculpture as a way to challenge it, per the outlet.

Loading...
Newer Post
Public warned to use only certified regulators with their LPG cooking gas
Older Post
London’s Hospitals Will Be Overwhelmed by COVID-19 Patients in TWO weeks

Streaming a Zoom Meeting or Webinar on YouTube Live 0