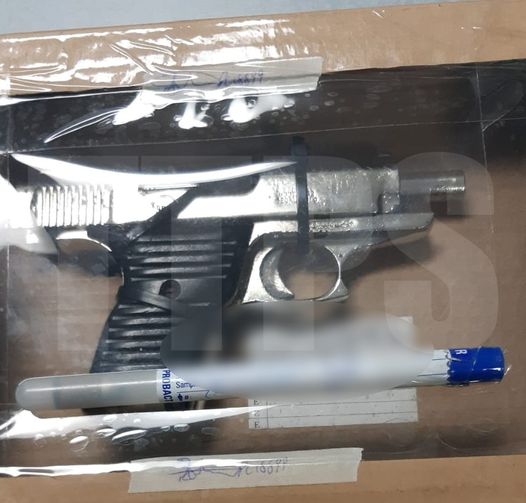 One man was shot and wounded and two others detained following a police-involved shooting incident on Nelson Street, Port-of-Spain, earlier today.

Around 3:40am on Thursday 20th May 2021, officers of the Inter-Agency Task Force (IATF) were on mobile patrol in a marked police vehicle, when they observed a white Hyundai Accent vehicle proceeding west along Independence Square South.

The vehicle then suddenly turned north onto Nelson Street and started to proceed at a high rate of speed. The officers became suspicious and began to follow, with the intention of intercepting the vehicle.

On reaching Building 74-76 on Nelson Street, the vehicle suddenly stopped, reversed into the yard of the building and collided with a Nissan AD Wagon. The officers then stopped on Nelson Street close to where the vehicles had collided and began approaching the Hyundai Accent vehicle. Two men then exited the vehicle and started shooting at the officers. The officers immediately returned fire with their service firearms. The two men ran off in an easterly direction and eventually escaped.

Officers then checked the white Hyundai Accent vehicle, where they found three men – a 27-year-old, of Maloney Gardens, and a 25-year-old and 31-year-old, both of Eastern Quarry, Laventille.

The third suspect was taken to the Port-of-Spain General Hospital to undergo treatment for a gunshot wound to his face. He is currently under police guard. The other two men were taken to the Besson Street Police Station. Police also took possession of a Lorcin pistol with one round of ammunition which was found at the scene. The Hyundai Accent vehicle was conveyed to SERU Cumuto.